Formed by 12 outlaws that used to protect the christian citizens in New York by Muslim attacks in 1992.
Since then the Black Hawk become one quite strong and respected organisation from many christians around NY and managed to gain complete immunity from government and police power due to an agreement..
after Black Hawk threatened them that they would release dozens of information about illegal activities from within the New York police department, they agreed to give Black Hawk their all wanted immunity and this is when the organisation become famous all around USA, and that hapenned rapidly.
Since then they grown in New York, owning 8 blocks as their territory.. where they were teaching to their people how to defend themselves with various martial arts and weapons, like a military training force but
of course a lot more advanced in terms of rules and discipline.
They grown very powerful, that greatly decreased the muslim attacks against christians in NY.
Hawks become a fear to them, no muslim dare to get close to their territory, it is certain death.
The muslims closed their territory behind walls afterwards, to live as they wanted without fear and since then it remains that way.. but the hawks will never forgive their terrorism against christians.

Like every other organisation around the globe that holds a good name of honour and power, the hawks are no different. The members are going under really tough training that surpasses even the military special forces training in certain aspects. The basics are mostly about acrobatics and freerunning training without any equipment or protective clothes for the members in order to put effort on their training.
The training is daily and is taking place during the early hours of morning.
It's a hawk's duty to do it, even under extreme weather conditions.

Pushing and boxing are both important exercises, they bring the body in high temperature
quickly and the exercise becomes harder, the body automatically gains inner strength
and the person becomes more aggresive and more concentrated on his target.
Precision plays a big role as well in every member and the exercise is boosting it over time.

How to hold a weapon is vital in the hawks training, experiance on this can save their
lifes in many life threatening occasions and with the fact that they live in New York this is more
like their hand's best friend. Black hawks have experiance in various type of guns and firearms
that is pretty close to mastery. Members get 9mm guns to begin with and the more they gain trust,
the more access they have on more powerfull weapons like shotguns, rifles, rocket launcers etc.

Of course, their training isn't limited to only physical, but the hawks are very religious as well.
Every 2 days they are gathering in the neighborhood to pray for Jesus and Mary Magdalene.
(they are real christians, supporting the true story of Jesus before the church manipulate it).

but 1st let's get to know the real Mary Magdalene shall we?

Who is the real Mary Magdalene?

The facts and theories about her true identity are still very confusing, even before the church tried
to ruin her image and succeded. Her true identity was still under questioning but one thing is truth,
SHE WAS NO PROSTITUDE AND IN FACT SHE WAS AMONG JESUS'S FAVOURITES! 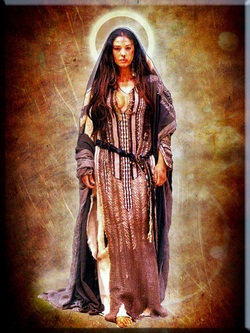 Mary Magdalene (by Karmie Varia).
It's truth, she was no prostitude. The church manipulated her true identity in order
to prevail among those who needed to believe in something. Mary was very close to Jesus
(in fact she was the closest companion he had, even from his students).
She was among the few who who stand by him even after his death, she continued to his teaching. There were many women who used to spread the message in the early christianity
and the church wanted to ruin the image of women in general since then.
Thats why in MANY portraits Mary appears with her breast uncovered, it was all planned
by the church for the male to prevail, that's why Mary has been called a prostitude, that's
why Mary was always alongside the sin word in the Bible, that was the plan.
If you still don't believe us go ahead and watch the video under this. it explains everything
about her and not just by anyone but by National Geographic itself!
In the book "Da Vinci Code" many things about Mary are facts, that she was married to Jesus
is a mystery though, there are no evidence of such claiming in Dan Brown's novel.

By National Geographic and us, for Mary Magdalene.

Back to Black Hawk, they are against the church and the false teaching, they wouldn't stand without action
at them either. They were informing the people in Ney York about the lies that the church was spreading,
as a result, many people went protest all around NY, it was no surprise why the church wanted to
ban the movie Da Vinci Code, if the movie wasn't talking about facts, why they would care to take action?
"Not everyone is as ignorant as the ones who believes in the Bible" the Black Hawk said.
The police, with the fact that the couldn't do a thing to them worring about their answer and if they would,
there would be more protestings against the police this time and as the truth start spreading, there
would be protestings against the government and the system itself.. they couldn't risk it so the Hawks
continue their work without anyone to bother them, and the people in NY were more informed that ever.
The Black Hawk gained a great respect from the citizens and quite quickly.

What is true faith? What does a human has to do to be called religious?
The answer is more simple than you think and it's all down to each ones mind. There is NO such thing as
a true believer if he doesn't know the true story behind his religion.
Most people just accept it as it's served without asking questions, without worry.. it's like accepting to have
a dinner without knowing what you eat or buying something you know nothing about.
The hawks are learning that it doesn't matter if you re going to pray every sunday morning or if you
share the message, they are taught to be FAIR towards others, defending those who can't defend themselves
and fight for what's right. That's why they are being trained like elite soldiers, that's why they are all
weilding wepons.. to protect.
And here is where their faith plays a major role in their training, the hawks know and believe in the true
christianity, their minds aren't about their religion though, they are about being fair, followed by their faith.
There are many people who believe in Jesus with their entire beings and still as humans, they can't be trusted.
What's better? One person who is religious to the bone and won't save you when you need help?
Or one who isn't as religious but knows how to be a true human being and stand by your side?
The hawks personality is based on animals personality because as you know, animals have way more
humanity and sense to protect other beings than humans themselves!